My 5 Highlights from the 1st Digital Fashion Week, Singapore

It’s been a week since Digital Fashion Week has ended in Singapore but at least for me, it’ll be a while before I totally digest it and the fact that I was in the middle of it all, talking to awesome designers and models.

All in all, it’s been a great experience; you have to start somewhere right? So even for someone who never hosted anything let alone LIVE for the world to see - yes I do look at those videos and critique myself – I was kinda proud that I managed to do it and most of all, have fun while at it. Yup now I’m convinced more than ever not to take myself too seriously when it comes to fashion ;-)

There have been some amazing moments, too many to count and some of which I’ve documented in the previous posts here, here and here, but I have picked those 5 highlights which I will forever remember and look back at as an unforgettable experience which I was so lucky to have had.

But the biggest question is, would I do it again?


Erm, in a heartbeat!!! It was the right amount of fashion, celebrity, fun, emtertainment and learning experience and I promise next time I won’t eat my introduction words – unless someone as stunning as Andrej is sitting beside me!

Meeting Thomas Wee and seeing his outstanding work up close.

Thomas Wee might not be a household name outside of Singapore, and some might argue he isn’t even one here either. But to those in the fashion industry he is something of a legend and with 35 years of experience, it would be impossible not to learn something from him. And I wasn’t wrong. From the moment I met him at the casting sessions for his models you could see he was a man who was as sweet as he was knowledgeable. He also is a man who knows what he wants and has strong views on the Singapore fashion scene. Seeing the sneak preview of his collection (including the first ever menswear line) I was so excited for his show at Digital Fashion Week and it didn’t disappoint.

To see this level of technique in the patterns, cuts and tailoring, the thought process behind the collection which went into details like thickness and colour of every piece was astonishing. During my G+ Hangout with him, I was so eager to listen to him explain all that and I left afterwards wishing I could see more of his work and ask more and more questions.

It was truly an honour and I know he’s a busy man but that won’t stop me from knocking on his door soon to get to see more of his work and learn a thing or two about this man whose work apparently even impressed Yves Saint Laurent the man himself! Chapeaux Bas!!!

Hosting the Google+ Hangouts with the designers and models.

Of course, the reason I was at Digital Fashion Week was to interview designers and celebrities backstage at the event on Google + Hangout and I have to say it was a blast. It was my first time ever doing live presenting and interviewing and I was more nervous than I’ve ever been. I mean, this was LIVE!!! And I think it showed in my first interview. Luckily the team who were producing and my co-host gave me tips and kept me relaxed and calm. By the end I wouldn’t say I was like an old pro but I was at least comfortable. The best part of the experience was also getting to talk to a lot of the designers and models who had surprisingly interesting, insightful and intelligent things to say about fashion and the Singapore scene. Despite the glitches, especially the less than impressive intros this is something I’ll always be proud of and remember it with fond memories.

All 8 of my Google+ Hangouts with DFW personalities can be found on demand here. Enjoy :-)

Oh my God! If you thought Guo Pei’s insane collection of Chinese wedding dresses was incredible on the catwalk then you have NO idea what it was like backstage. Quite possibly the most beautiful and exquisite collection of things ever to grace one runway! I could have stared, photographed and coveted all day long. Seriously, every single piece was utterly breathtaking.

The detail, the tailoring, the colours, it was a feast for the eyes. Words really cannot do it justice. Not even close. Even these pictures I shot backstage cannot begin to accurately showcase the majesty of this modern day genius. Best was I got to chat (via a translator) backstage to the designer and told her in my limited Mandarin how beautiful her creations are! I really did wish afterwards that I had went for a Chinese wedding dress when I got married ;-) 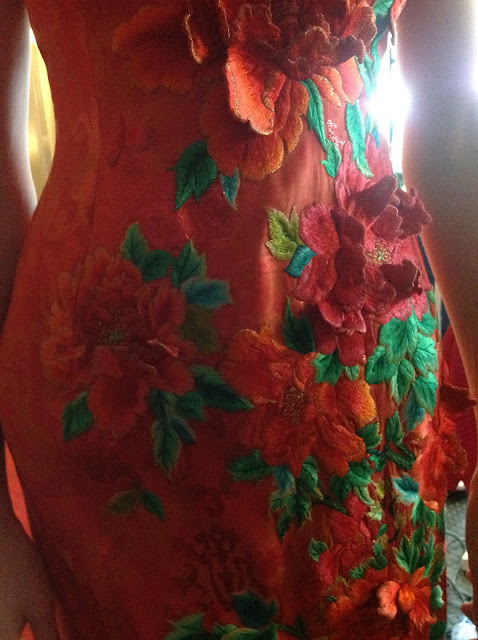 One of the best things I took out of my experience during DFW is a genuine friendship with a gorgeous and talented woman, who shares with me the idea that fashion should be fun and an insane love for shoes. This is Yvette King, the beautiful face you kept seeing backstage, running from one corner to another trying to bring the viewers the amazing experience we were having at the venue.

The thing about Yvette is that she is unpretentious, genuine and possibly one of the ‘nicest’ people I’ve met in this industry. We had great fun before the event running around Parco next NEXT, picking some local designers’ outfits to empathize the message which DFW was all about. And yes having the same size shoes and clothes came in handy as we swapped and borrowed eachother’s pieces and will continue to do so!

Yvette runs a relatively new blog (www.tanjongbazaar.com) along with her photographer friend Katherine and we’re planning on some awesome and fun project together so watch this space and go like her facebook page to keep posted!!!

Hanging out with the down-to-earth  Andrej and Sophie who genuinely loved the clothes they modeled from the Singaporean designers.

OK, I’d be lying if I said that meeting the likes of Andrej Pejic, Sophie Sumner and Patricia Field wasn’t an amazing experience. Because it very clearly was. What was most surprising was how open they were – both in terms of how easy going they were with wandering around and stopping for endless photos and impromptu chats with their fans and in terms just how down to earth and friendly they seemed to be.

They were absolutely genuine in their praise of Singaporean labels and seemed truly impressed by the clothes they were modelling. Sophie and Andrej were also gracious and friendly with the backstage crew, and we enjoyed a few great nights out after the shows. Everyone got on so great that we ended up exchanging contact details. Totally shattered my misconceptions about aloof famous models.