Apart from the Parco next NEXT designers’ show, (yup the one I was in!), Singaporean designers had a fair share of spotlight this year at Audi Fashion Festival.

Of course I would have loved to see more of the local labels represented but the turnout and the vibe was good start – and hopefully a platform for what is an incredibly strong bunch of labels this year.

The main show I went to was Singapore designers showcase which featured 3 labels: Saturday, Depression and a.w.o.l. – I also made it to see alldressedup’s show after label owners Lionel Leo and Tina Tan-Leo kindly invited me.

This is a bit of bitching but I'm still a bit disappointed I didn’t make the all-important media list for the Future Fashion Now show (With Mae Pang, Max Tan and Dzojchen) despite showing great interest in and support for the local designers since I’ve started this blog.

Still, never mind, there was plenty to see in the shows that I did get invited to. So with no further delay, here are my brief reviews of these AFF shows:

Opening for the show was local label Saturday which is known for its easy to wear and simple pieces suitable for Singapore minimalist fashionistas.

The collection consisted of light knit dresses in metallic hues and some separates which were a bit too wintery for Singapore weather. I liked the colours especially the shade of gold and one dress in particular which had draping in the front, giving it a very modern Greek Goddess feel and would look even better with a chunky belt.

On the flipside I have to say that some of the dresses seemed to be too thin for comfort. Even the models’ underwear was clearly visible underneath making it almost impossible for anyone with hint of curves to pull off without a pair of spanx. Definitely one you'll need to layer to pull off.

All in all, the looks had an easy breeze about them making them suitable for one of those days where you want to look nice and effortless but can’t be bothered to think of an outfit. 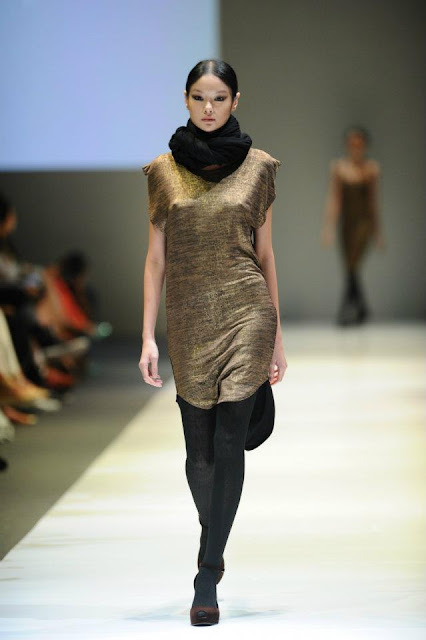 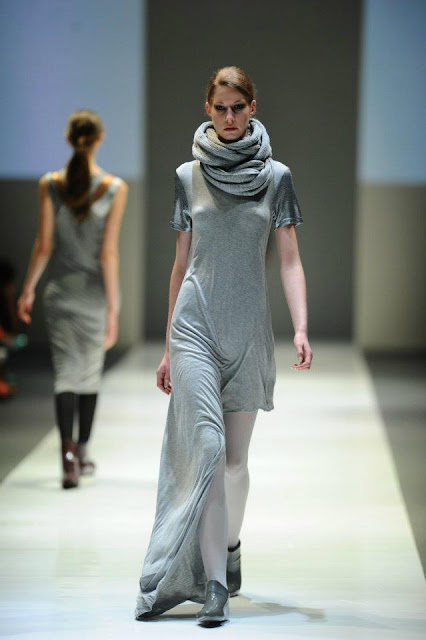 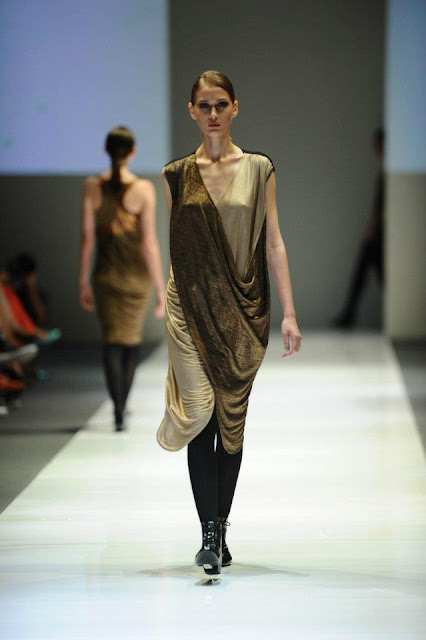 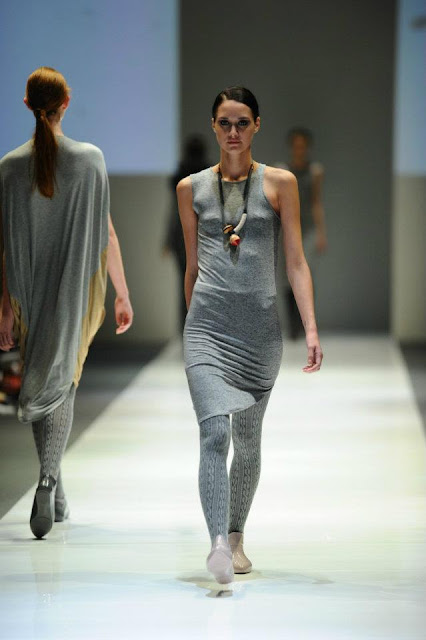 Second in line was the DEPRESSION show, with their collection entitled Plastic Surgery.

The first model to come out had a white mask on his face and set the stage for more dramatic looks to come. Most noticeable were the fierce accessories from a studded floppy hat to clutches and statement necklaces which only a few people can pull off. But again – despite a more commercial bent of late - this is a label which has built a reputation on being different and alternative.

I did like a lot of the pieces especially a mullet-shaped black dress which looked edgy yet easy to wear. I also loved the caped black and white look with rounded slits which is a little more lady-like than we’re used to from the label. Colour-wise, there was an interesting use of bright shade of blue which worked well with the black and gave the grim theme a little brightness.

One piece kept me puzzled though, the black and white dress which had a face on one side and fringes on another; I’m very eager to try once it hits the shop. All in all, I thought depression did their fans proud. They wanted edgy, fearless and interesting designs which project a strong character and is not for the faint-hearted.


Last was the All Walks of Life or a.w.o.l show. It was hard to judge it instantly and I had to look at the pictures again and again to make up my mind. I did like few pieces like the structure black and white printed jacket but I thought that at some point the collection wasn’t strong enough and the graphic print usage got a little too much at the end.

My favourite piece was the asymmetrical golden ruched dress which was accessorized with elbow length leather gloves.

However,  It is always important to remember that all 3 labels are relatively new and have room to grow and develop more focus. 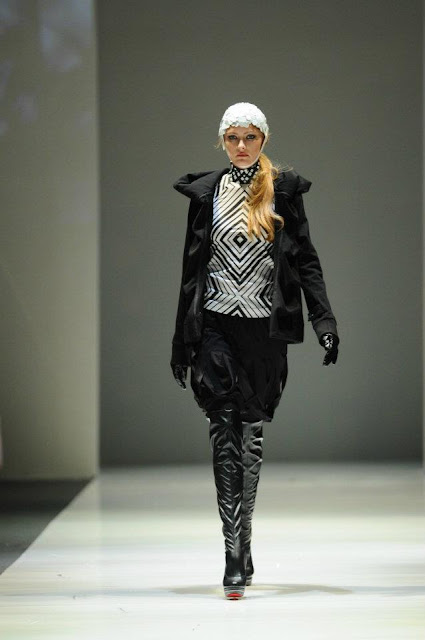 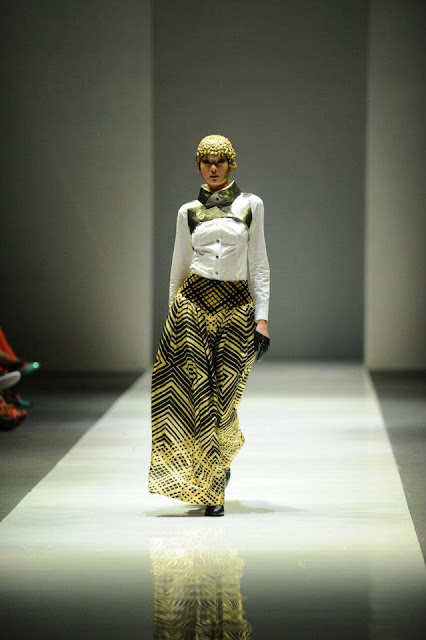 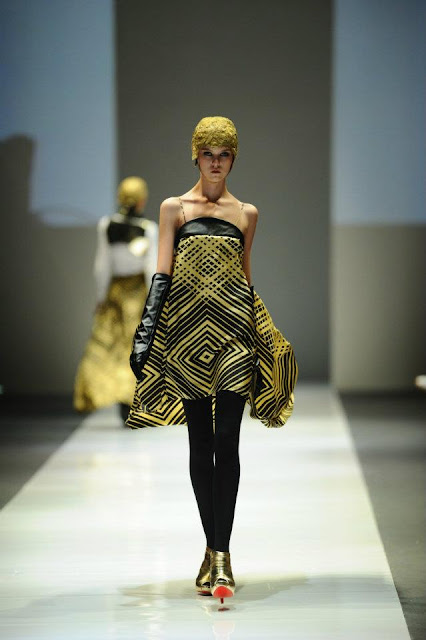 Lastly I was lucky enough to get an invite for Alldressedup.

You know what to expect from one of Singapore’s great success stories. It’s not clothes for kids, but for people with a great deal of sophistication and merest hint of an edge. And that’s exactly what they delivered.

High on aesthetics and and a collection that understood where the right side of ‘drama’ to stay on. From the moment the lights went down and the first perfectly coiffured model took to the runway clad in an elegantly draped grey, white and black maxi-dress it was a masterclass in how to put together effortlessly classy looks with that little conversation starting twist.

The black, white and grey pattern – which resembled a charcoal artists palette - was the recurring theme that the collection was pegged on, making an appearance in numerous guises from skirt, to trouser to draped dress. But it wasn’t all monochrome.

The collection had plenty of colour, most notably a stunning floaty summer dress oozing wow factor. Its bright mono-block saffron yellow colour is sure to be a hit at any party. Big bold collars, bow-ties and severe draping also gave the clothes a touch of drama to set them apart from the mundane.

But the over-riding message from the show was wearability. If I’d have stolen an outfit from backstage and made it to the street, the only attention I would have attracted would be from street-style snappers and admiring glances from passers by. You can’t often say that about the theatrics of runway collections. 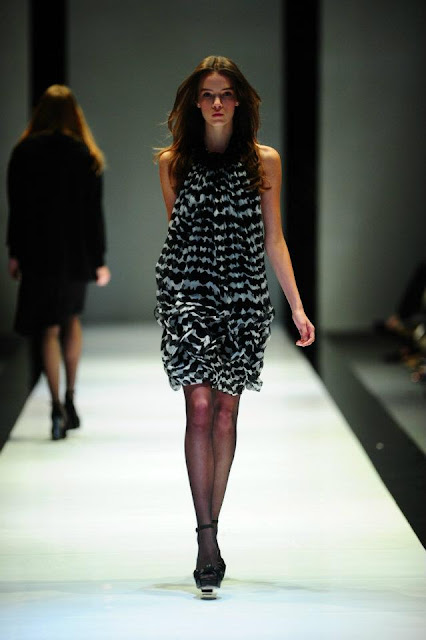 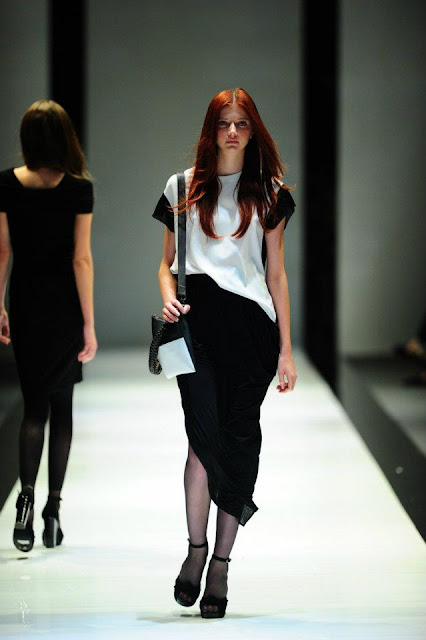