Living a Model Life: Backstage at the Audi Fashion Festival in Singapore

Ever since the guys at hip Singapore street-wear label MASH UP asked me to walk the runway at their Audi Fashion Festival show I had been anticipating this moment. May 19 was a big day!


This was probably going to be the most exciting thing I’d done in my life. I mean, seriously, how many chances do ordinary people get to walk a real life catwalk, in front of well over 1,000 people?

So you can imagine just how crestfallen I was when Thursday came around. My eye went red, and basically closed. I was stood in the street, helpless, waiting for my husband to come and pick me up.

We went to the nearest hospital and when the triage nurses saw my eye, they told me to go straight to A&E. I was eventually told I had badly scratched my cornea and that it would take at least a few days to heal.

As I headed home with an eye-patch on and in excruciating pain, my world fell apart around me. How could I walk the runway now?

Luckily the recovery was faster than I expected. I could open my eye a little by Friday evening, and the amazing Nat from Mash-Up said they’d construct a cool eye-patch for me to wear.
But regardless of the state my eye was in, I was going ahead. Let’s face it, I grew up in a war, so a mere medical emergency couldn’t keep me off that catwalk.

So like a true fashion addict, I took inspiration from Carrie Bradshaw when she fell off the runway and just picked herself up. I'm not giving in, I thought, so I put my eye patch on and went for the show!

Actually, there were many instances on Saturday that reminded me of the episode in Sex and the City where Carrie get asked to model at a charity fashion show. No, I didn’t have to model in sparkly underwear, and no, I didn’t take a tumble in front of hundreds of flashbulbs - but the whole fish out of water feeling was there from the moment we started rehearsing at 6:30am..

For a start, you could sense division between models and non-models (we are actually called talents).  The beautiful people were weren’t exactly breezy in their outlook (I guess you’d call it ultra-professional) and it was interesting to see the stony faced expression (except for one who kept giving my camera the peace sign!) isn’t just restricted to the catwalk.


I guess that while for us it’s a once in a lifetime experience that we want to enjoy to the maximum, for them it’s just another day at the office, and they had to have their game face on!
But the most noticeable difference is the obvious one – these girls (and guys) are way, way taller and have sharp, angular features compared to my tiny face and massive mop of hair.

OK, so the models take it more seriously than us mortals, but was it fun? Hell yes!!!

It was especially amazing getting to see the designers I’ve spoken to and interviewed working backstage, I was truly happy to share this special day of theirs and hopefully give them some more support when they need it.


By some quirk of fate, my eye had almost totally healed by midday and so I could cast the specially made eye-patch to one side.

Instead I went to hair (whose inspiration was Scary Spice!) and make up which consisted of purple eyebrows and half a dozen bindis on my forehead.

And then came another difference between models and the ‘talents’ – body parts! They were everywhere. Boobs, briefs, panties, six packs all on display everywhere. So casual. Of course I felt a bit more self-conscious so I found a quiet corner to hide and change in. I didn’t want to inflict my semi-naked body on the rest of the room!

Once I’d changed into my outfit for the show, the nerves started to kick-in.  But I found a lot more time to chat with people backstage and this helped immensely (well up to the point where I found out I was the oldest person walking the runway that day!)

But eventually the time came. We could hear the music starting backstage. We’d rehearsed and knew our places. They told us just to have fun. This wasn’t supposed to be a po-faced, blue steel kind of show. 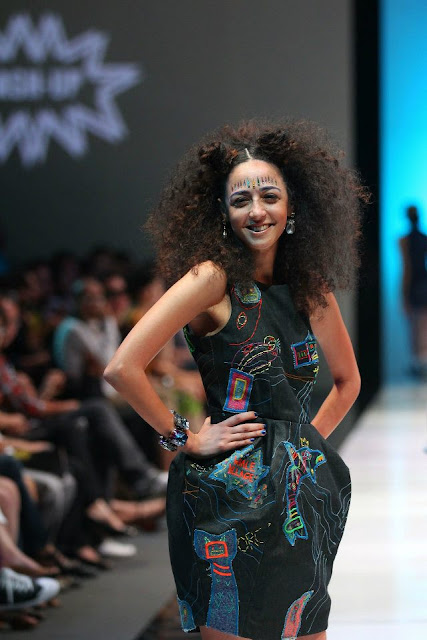 Finally my moment came, and perhaps for the best I had someone to share it with – namely Lisa- the skater kid who stole the show. Funnily enough, it made it so much easier for me to walk knowing that most of the attention would be focused on her instead. I almost felt like tripping on the way back but made it through with no drama and far too many smiles.

All that effort for 30 seconds? And in front of all those people? This was yet another experience that makes me realize that the life of a model is not all roses.

Was it worth it? Haha what do you think? It was a totally unforgettable experience. Not just because it was fun but also because you got to see the raw emotion displayed by some of these young designers. Watching them let their emotions get the better of them backstage after the finale was very moving. You could see just how much this means to them.

These guys have put on a great show full of creativity, surprises and fresh with its concept. All I can say is I hope everyone could see what potential I see in them and give them full support because they deserve it.


Don't just take my word for it. You can watch my brief contribution by clicking on this link to watch the video. 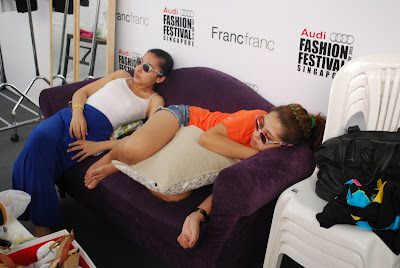 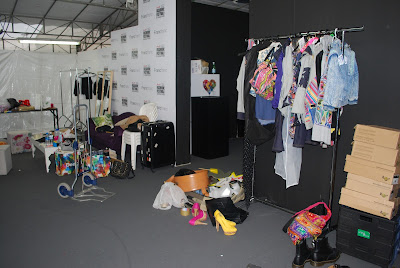