Yup... the secret that I've been keeping from you for a few month now, is finally revealed: This year's Digital Fashion Week's guest model is none other than the One and Only British supermodel Naomi Campbell!

Controversial? Maybe. Legendary and simply un-matched as a model? Definitely! My heart almost skipped a beat when for the first time I was told that she might be coming to Singapore for DFW - especially that I will be co-hosting the event like last year! (Check out my involvment and coverage of last year's event here).

And while I got to interview the awesome Andrej Pejic last year, I'm now terrified at the prospect of meeting her backstage, let alone talking to her in front of the camera.

I cannot wait! And what I'm mostly happy about is that to have such a legendary model not just show up at the event but also walk for a Singaporean designer! Yes, she won’t be there just to show her ‘super’ pretty face and bod, she will actually be walking for one of the local designers who is opening DFW. Such a move will definitely guarantee that the world will be watching what’s going on the Singaporean fashion scene. 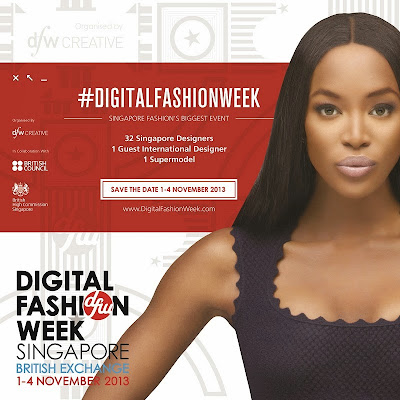 And apart from brining Naomi, DFW is showing some serious Singapore fashion this year for as many as 32 local designers are taking part in the event. Some will be showing their collections on ‘THE RUNWAY SPACE’ (watch out for In Good Company, Al&Alicia, Frederic Sai, L’ILE AUX ASHBEY, YOUYOU,  -  and the amazing Thomas Wee - in addition to Pauline NING, Max Tan and MAE PANG whom you’ve seen me rocking their stuff on this blog before!).

That’s not all, in order to extend their support for the young emerging local designers, DFW is also opening up a SHOWROOM SPACE this year to showcase their work. These include some of my favourite designers (and friends) from LION EARL and MASH UP, Carrie K, Yumumu and many more…

My role? Well, I will have the pleasure of interviewing the participating designers on Google+ Hangouts just like last year - something which I’ll hopefully be a bit better at this time ;-) especially that I know most of the designers very well.

Of course that’s in addition to hanging out backstage with my lovely co-host Yvette King of Tanjong Bazaar and discussing shoes on camera when we have nothing better to do (seriously you should not miss that, we’ve got important stuff to say!)

And just like last year, everyone is invited to be part of this event which prides itself for supporting the local designers with all its heart and soul. All you have to do is tune in at the Digital Fashion Week website and watch the shows, interviews and backstage action live-streamed as it happens! You can even interact with them on all social media…

So bookmark this space for more updates very soon and once any news come my way, you'll surely be the first to know!

Meanwhile, I have a challenge for you: What do you think my opening line should be when I get introduced to Naomi? I'll give you a clue in the photo below ;-)