Singaporean young designers at PARCO next NEXT Phenomena 2011 Fashion show 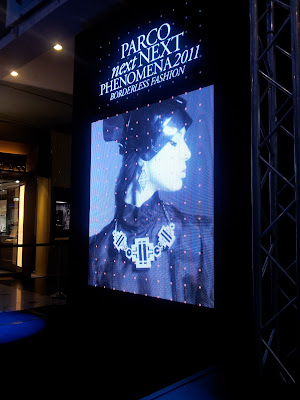 When, like me, you’ve just moved to Singapore from over 3000 miles and started blogging about local fashion, nothing can warm your heart and make you feel welcome more than the first invite you receive to attend a fashion show.
Ok, I know this wasn’t the Prada SS2012 show, not even the Singapore Fashion week but to me it was far more significant because it was an opportunity to see the work of young up-and-coming Singaporean designers and get to meet them and lend them some much-needed support.
The event in question was the PARCO next NEXT Phenomena 2011, where 6 promising local designers of the incubator project sponsored by Parco were showing their collections to a small but interesting crowd.


The event was very well organized and although I am a very new blogger on the scene, I still got to sit in the second row and was quite pleasantly surprised by how unpretentious, friendly and welcoming the fashion crowd is in Singapore.
The shows themselves were simple, but with a hard edge. Contemporary rock music permeating the air as dramatically made up models skulked the runway.
Although most of the designers stuck with muted or monochrome palette, you could see a style, cuts and most of all distinct identity starting to come through in their work.
Best of all, the clothes were for the most part edgy but wearable, which as a young designer in a less fashion focused environment is kind of the holy grail.
Let’s face it, in that situation you have to appeal to the local public and be a commercial success.
Personally speaking I would have liked to see more colour (the bane of Singapore dressing), but I think there were definitely more hits than misses. And there was definitely evidence of real attention to detail when it comes to the cut and layering.
Following is my very brief review for each designer
A.K.A. Wayward by Mun Foong:
The women’s collection looked preppy with buttoned up tipped shirt collars and mostly pastel hues. Despite the simplicity of most of the pieces, the clothes looked interesting on the runway thanks to clever styling by adding accessories such as straw hats, picnic baskets as handbags, over-the-knee socks and cute bows as headpieces. The men’s collection showed a little more edge with the use of colour and patterned, especially checked, fabric.
Eve by Eve Tan:
Eve was all about practicality where her collection of mainly jersey dresses and separates was nice but lacking the ‘wow’ factor. I liked the small draping details which are very typically Asian but I would have loved to see more colours apart from the burgundy/black/grey combo which seemed to be the theme of the night’s shows.
Jaunty Boys:
Jaunty Boys was probably the most experimental and fun of all labels. It kind of surprised me to see that men’s fashion designers in Singapore are more likely to use bright colours and edgy cuts than women’s. The collection was simple in cuts, mainly t-shirts, shirts and shorts, but added much-needed fun with combining geometric patches of striped (or polka dots) fabric in bright and flashy colours. The result was quite interesting; made more intriguing by the fact the designer himself was clad entirely in black.
OwnMuse by Oon Shu Juang and Johanna Lau:
Between all the designers who favoured muted colours, practicality and used jersey, OwnMuse’s collection was the most mature, elegant and sophisticated. I loved the grown up palette of burgundy and navy blue especially when combined with white. My absolute favourite piece of the night was an off-white dress with elbow-length black sleeves which had the prettiest and most minimal hand-embroided details in hues of brown and mustard.

Ready.Made by Sabrina Gunawan:
This collection had a different feel from the rest and the designer favoured tribal accessories and more bohemian cuts to jersey dresses. This show definitely had the best presentation – with mask clad models.  The piece de résistance came with the final pairing who came out looking like a cross between and a 21st Century African tribe and a WWE wrestler.
Sophielle by Kanwal Jit Kaur:
Sophielle collection was definitely the strongest and boldest at this show thanks to the contrasts in colour, fabric and cuts which were combined to make statement and edgy looks. While white soft material like chiffon and silk were given more fluidity by draping effect, contrast came in form of black fabric like shiny leather which was used to make form-fitting tops and skin tight pants. I also loved the edgy accessories and the bondage-style details which were nothing short of fierce.
Twenty2Seven by Zee Tan:
Again black and white were the theme of this collection however this time, the result was much softer, more classic and feminine. Twenty2Seven’s collection was very ladylike with a twist to make it appeal to a younger crowd. I especially liked the cute little black and white dress with oversized tulle bow at the back teamed with bright fuchsia tights. To add a dash of colour, the models were carrying adorable handbags from local label Veira which I liked so much that I’ll be posting a Q&A with the designer behind it, Wei Ling later this week so don’t miss it!
Un-covered by Johanne Loh:
Johanne Loh ‘s collection is all about shapes and contrasting colours so it’s no surprise that the designer took inspiration from origami. The cuts were very interesting especially the skirts which look comfortable and stylish at the same time. My favourite piece was a black skirt with puffball-like shapes poking out of it like a 3D object. The clothes were shown to extreme effect with the help of cute origami-shaped hats and clutches which unfortunately were not for sale L.
*All the above collections are sold at PARCO next NEXT, within PARCO, Marina Bay Level 2 at Millenia Walk.